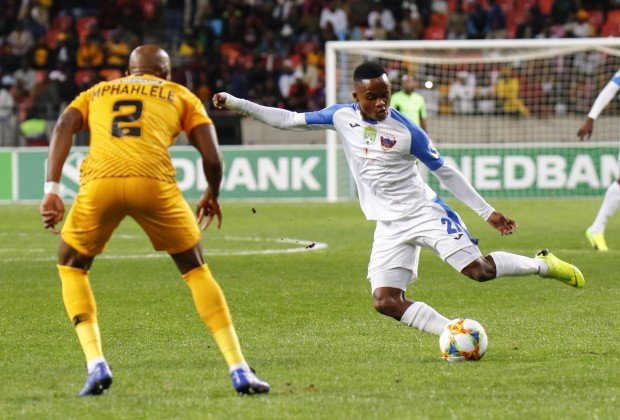 Kaizer Chiefs have extended their advantage at the top of the Premiership following a 2-0 win away to Chippa United at Nelson Mandela Bay Stadium on Wednesday evening.

The Amakhosi kept up their 100 per cent record on the road this season thanks to two goals from Dumisani Zuma, a result which pushes the Soweto giants seven points clear of second-placed Mamelodi Sundowns, who could only draw 0-0 away to Baroka FC in a concurrent match.

With the Soweto derby looming on the weekend, Chiefs coach Ernst Middendorp opted to field a much-changed line-up compared to the team which ousted Orlando Pirates from the Telkom Knockout four days ago.

A lack of cohesion, particularly in midfield, was evident from early on for Chiefs. Their busiest player in the opening minutes was goalkeeper Bruce Bvuma, who made several decent saves before an excellent stop in the 12th minute to keep out a long-range effort from Boikanyo Komane.

Chippa suffered an early injury blow when left-back Elvis Moyo picked up a thigh problem and was replaced by Sandile Mthethwa in the 20th minute. Chiefs had a foothold in the game by this stage and eight minutes later they missed a great chance to go ahead when Ngezana headed over from a corner kick.

Further injury problems forced the Chilli Boys to use all three substitutions by halftime, with Gregory Damons replacing Komane and Kurt Lentjies coming on for Frederic Nsabiyumva. Chiefs’ Samir Nurkovic almost broke the deadlock in injury time with a beautiful volley which clipped the top of the crossbar, leaving the game at 0-0 at the interval.

The away side made their first change at the start of the second half, introducing Maluleka off the bench to replace Moleko. Yet it was Chippa who looked the more dangerous team in attack, finding joy in putting passes in behind Chiefs’ defence for the likes of Augustine Kwem and William Twala to run onto.

However, midway through the second half, the Amakhosi claimed the lead through a fine goal from Dumisani Zuma. The forward picked up a pass from Willard Katsande, drove the edge of the box and sent a low shot past the left hand of Patrick Tignyemb in the 67th minute.

Chippa responded well to going behind and continued creating half-chances for Kwem, whose power and pace worried the Chiefs defence. However, they were able to add to their advantage with another Zuma strike in injury time, continuing their momentum heading into the Soweto derby against Orlando Pirates this weekend.