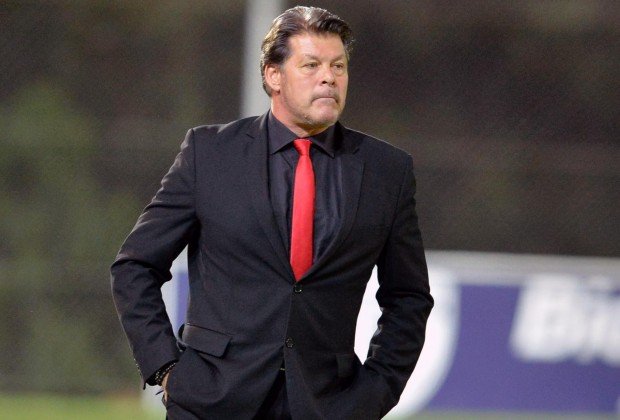 Newly appointed Black Leopards coach Luc Eymael was in the stands at the Thohoyandou Stadium on Sunday afternoon to see the home side held out for a hard-fought 1-0 league win over Bloemfontein Celtic.

Celtic missed a penalty and probably deserved to get more out of the game. But Eymael – who returned to South Africa earlier this week and is still waiting for his paperwork to go through before he can take his place on the bench, was still seen issuing instructions from the stands and would have been pleased with the fight and character his men showed to hold on for maximum points.

Leopards were off to the perfect start when with eight minutes played, Mwape Musonda picked the ball up outside the area, played a one-two with Thuso Phala before beating Jackson Mabokgwane from close range despite the goalkeeper getting his hand to the ball.

The Zambian then had a wonderful opportunity to double the scoreline 10 minutes later after arriving in the box to get on the end of a pin-point cross from Lifa Hlongwane, but from just a couple of yards out, he steered his shot wide of an open goal.

Musonda also spurned another decent opportunity by shooting straight at Mabokgwane from 12-yards out.

It was nearly to prove costly for Lidoda Duvha when Khomotso Masia took down Celtic substitute Victor Letsoalo inside the box and a penalty was awarded to the visitors six minutes before the interval.

But Ronald Pfumbidzai’s spot-kick lacked conviction which enabled Leopards keeper Jonas Mendes to make a fairly straightforward save to keep his side in the lead.

Celtic also wasted a great chance at an equaliser 10 minutes after the restart, when after going clear in on goal, Ndumiso Mabena fired tamely at Mendes.

The hosts needed another goal to dampen Celtic’s spirits, and it nearly came in the 81st minute through Arohasina Andrianarimanana, but his curling shot from 18-yards was brilliantly kept out by Mabokgwane.

The final 10 minutes though belonged very much to the Free State team, and it took a superb reflex save from Mendes to deny Mahashe in added time as the Limpopo club secured their second league win of the season.