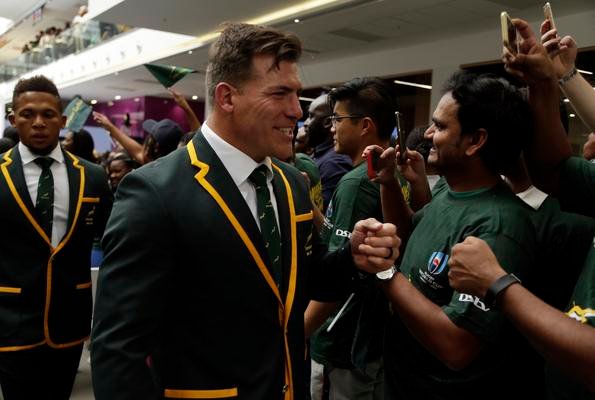 The Springboks held a departure function at OR Tambo International airport in Johannesburg on Friday, as the team prepared to leave for Japan to compete in the Rugby World Cup (RWC).

The team leave later on Friday for Japan.

The Springboks play Japan in a warm-up match on September 6 and then open their RWC pool commitments against New Zealand two weeks later, on September 21.

“We embrace and appreciate it and we are grateful for the South African public who are right behind us,” said Kolisi.

However, Kolisi warned that hard work lies ahead in Japan.

“We will definitely build on what has worked on but we know that we have to start from scratch,” said Kolisi.

“The Rugby World Cup is a completely different animal and every single team pitches up, so we have to go there well-prepared.”

Kolisi missed the entire Rugby Championship campaign because of a knee injury, but he returned to action against Argentina in the Springboks’ last home Test match.

“I’m feeling really good, to be honest,” was his reply when asked about his current fitness levels.

“I was a bit worried (before the Pumas Test), but the great thing is that I was with the squad right up until they went on tour (to New Zealand and Argentina). The coach kept me with the rest of the team and I was involved in everything.

“But it was just a waiting period to see how the knee holds up, and it held up very well. It was not my best, but I was happy with the way that I played against Argentina. These past couple of weeks were also helpful, training-wise,” added Kolisi.