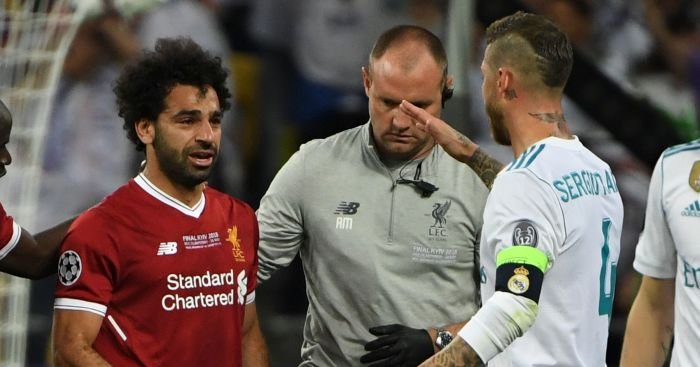 Egyptian international and Liverpool forward Mohamed Salah has rubbished rumors of revenge ahead of Liverpool’s re-union with Real Madrid’s Sergio Ramos the man who was responsible for the Egyptian’s first Champions League final ending in tears.

During the 2018 Champions league encounter with Real Madrid Salah was forced off after 30 minutes, with the score at 0-0, in Kiev after being hauled to the ground by the Spain defender Sergio Ramos which resulted in a shoulder injury.

During the 2018 Champions League final Liverpool lost to Real Madrid by 3-1,a year later returning to lift a sixth European Cup in Madrid against Tottenham with Salah opening the scoring in the final.

With Liverpool and Real Madrid preparing to face off next Tuesday in the Champions League quarter-finals, Salah says he was not dwelling on his history with Ramos.

“That game is in the past, so I don’t think about it. I’m thinking about the team. Everyone is focused on their team and everyone wants to win… that’s it,” the 28-year-old told Marca in an Interview.

“What’s going to happen now isn’t going to change the result of the final in Kiev. That’s in the past.

“Let’s just say that I have special motivation to win the tie and go through to the semi-finals.”

Mohammed Salah said during the interview that both teams have changed since 2018 with Cristiano Ronaldo and Gareth Bale, who came off the bench to score two decisive goals with the score at 1-1,on loan at Tottenham, same with Liverpool who has lost two players from then starting eleven.

KIEV, UKRAINE – MAY 26: Sergio Ramos of Real Madrid consoles Mohamed Salah of Liverpool as he leaves the pitch injured during the UEFA Champions League Final between Real Madrid and Liverpool at NSC Olimpiyskiy Stadium on May 26, 2018 in Kiev, Ukraine. (Photo by Michael Regan/Getty Images)

“It’s different,” Salah said. “They’ve lost some great players, like Cristiano Ronaldo the best in the club’s history, someone that scored so many goals.

“At the same time, they’ve signed (Eden) Hazard. Eden’s been unlucky, he’s been injured… but it’s a different team.

“This team is in the quarter-finals, it has great players (and) although they’ve lost Ronaldo’s goals I can’t say which is better.

“Since then, we’ve won the Premier League and the Champions League. We’re winners. That’s a big change.”

Salah has frequently been linked with a move to Spain and giving a second major interview in three months to Spanish media will only increase speculation.

Football fans will remember December last year when Salah was unhappy after being denied a chance to captain his team in Champions League against Midtjylland, and subsequent substitution reaction against Chelsea earlier this month that led to questions being asked about his relationship with manager Jurgen Klopp.

When asked about it Salah had little to talk about it; “It’s a normal relationship between two professionals. That’s how I’d describe it.”

With Salah’s future at Liverpool a subject of speculation it is not clear whether he will still remain at the club or he will leave as many rumors has it, but when asked he said;

“I hope to be doing the same thing that I’ve been doing in recent years: winning trophies, scoring goals, helping my team win trophies, that’s the most important thing for me.

“It’s not up to me. We’ll see what happens but I prefer not to talk about that (a possible future move to Spain) now. I hope to be able to play for many more years. Why not?

“No-one knows what’s going to happen in the future, so maybe one day, yes.”