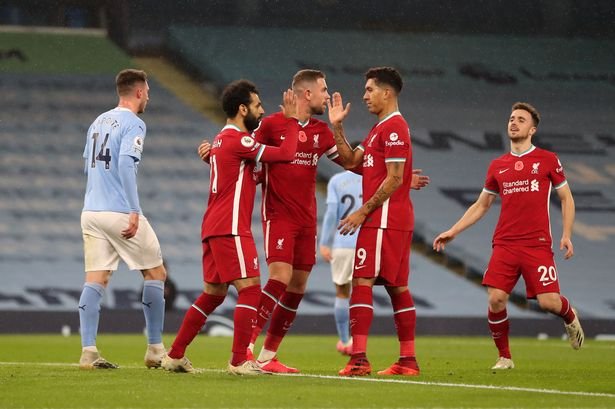 Manchester City and Liverpool drew 1 1 in their Premier League match on Sunday.

The visitors travelled to Etihad with an injury-hit squad but were able to hold their own against their rivals.

Liverpool looked sharp and focused upfront with manager Jurgen Klopp adapting to a familiar formation of 4-2-3-1.

Egyptian Mohamed Salah gave the Reds the lead from the penalty spot in the 13th minute after Sadio Mane was brought down by Kyle Walker in the box.

It did not take long before City’s second choice striker Gabriel Jesus scored the equaliser from close range in the 31st minute.

Kevin De Bruyne’s pass found the Brazilian who twisted well to ghost past Trent Alexander-Arnold and poke the ball past his countrymate, Alisson Becker.

The Citizens could have gone in front after being awarded a penalty after De Bruyne’s cross struck the arm of Joe Gomez.

Skipper De Bruyne stepped up to take the penalty duties but his shot was well wide of the mark with the match ending 1 1 at halftime.

The Belgium international will hope the penalty miss will not decide Man City’s title chase as they seem struggling already in the league.

Liverpool sit in third behind Leicester City and Tottenham Hotspur with 17 points as City are 10th with 12 points and a with a game in hand.

The Reds will hope that their right-back Alexander-Arnold has not sustained a major injury as he was forced off in the second half and replaced by versatile player James Milner.