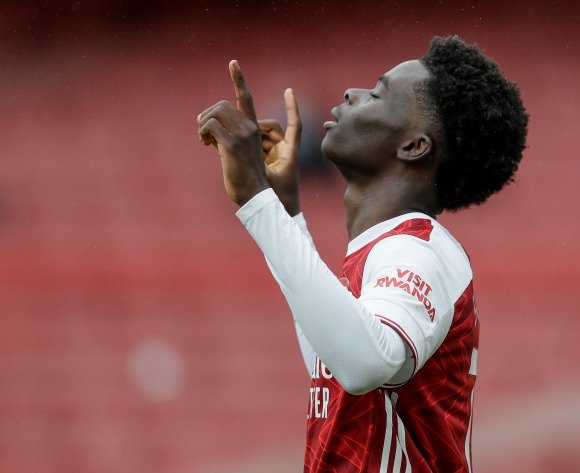 Arsenal star Bukayo Saka has opened up on his decision or opting to choose England over Nigeria at the international level.

The young talented winger Saka will kick off his international football career with the Three Lions over the Super Eagles.

Saka is undoubtedly a promising prospect that has emerged from Arsenal academy and has cemented his place in the first team at the Emirates.

Despite his young age, Saka has proven to be a key man in the Gunners squad, who possesses such maturing on the ball and versatility on the pitch.

Speaking to Own Goal Nigeria, the teenage sensation explained why he opted to represent England over West Africa nation Nigeria.

“Choosing Nigeria over England would be a tough decision,” Saka said. “My whole family has been in England like forever, it would be very strange for me to adapt to an environment that I had never been in since growing up.

“When I grew up all my documents stated that I am English, hopefully, Nigerian people will understand.

Metro recorded, ““I feel like I’m really, really proud of my Nigerian heritage. I always still watch Nigeria’s games where I can and I wish them all the best and support them all the way.”

Last season, Saka recorded one goal and five assists in 26 games for Arsenal. This campaign so far, the wonderkid has registered five goals and two assists in 23 appearances for the North London club.

He has also one goal in four appearances in Arsenal’s Europa League involvement. Many clubs looked to woo the left wide player from Emirates but instead the club gave him a new improved bumper contract.

Liverpool were reportedly eying Saka’s signature before Arsenal offered the England international  a lucrative deal to keep him.

Arsenal coach Mikel Arteta is known for his faith in youth and he has given Saka more time and even the jersey number 7.